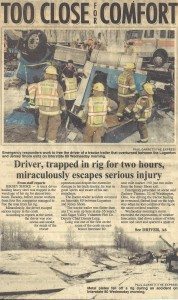 JERSEY SHORE — A truck driver hauling heavy steel was trapped in the wreckage of his rig for almost two hours Tuesday, before rescue from four fire companies managed to free the man from his rig.

Miraculously, the driver escaped serious injury in the crash. According to reports at the scene, the driver was conscious and awake for much of the
rescue operation and despite the extensive damage to his truck-tractor, he was in good spirits and aware of his surroundings.

The tractor-trailer accident occurred on Intestate 80 between Loganton and Jersey Shore.

Long was one of the first on the scene Of the crash on eastbound Interstate 80 near mile marker 190 just two miles from the Jersey Shore exit.

Emergency personnel on scene said Zachery Thomas, 32, Of Washington, Ohio was driving the tractor hauling an oversized flatbed load on the highway when he lost control of the rig on the snow-covered roadway.

Wednesday morning’s storm exceeded the expectations of weather forecasters, laid down a mess of white snow and sleet and sparked a spate of fender benders, cars skidding off roads and similar emergencies.

The storm kept state troopers busy into the afternoon, and many of them were unable to return to quarters or file incident reports outlining the difficulties experienced on the roads.

The rig was owned by K and R Transport Of London, Ohio.

When the rig veered out of control, it flipped onto its roof and spilled a load of 10 portable metal road decks onto the shoulder of Interstate 80. Miraculously, Thomas was not severely injured. “He was talking to us the whole time and was anxious to get out, but it takes a while sometimes,” Long said. “The rig was upside-down on top of him and his legs were pinned between the dash and the seat.” 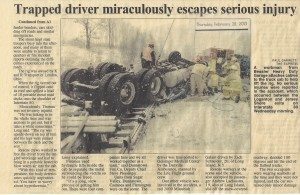 Rescue crews worked to free the driver from the tangled wreckage and had to bring in a portable heater to blow warm air into the cab.
“With this kind of temperature, the body deteriorates quickly unprotected. You have to worry about hypothermia„” Long explained.

Firemen used hydraulic lifts inside the cab to separate the metal surrounding the victim so he could be freed. “It’s a long, slow process Of getting him out. There were four companies here and we all worked together as a team,” said Dunnstown Fire Co. Deputy Chief Steve Plessinger.

Units from Sugar Valley, Dunnstown, Castanea and Flemington were on the scene. The driver was transported to Geisinger Medical Center by the Danville Ambulance, manned by the Life Flight ground crew.

One Other vehicle was involved in the accident, a red 2000 Mitsubishi Galant driven by Zach Schneider, 20, of Long Island, N.Y.

Rescue workers at the scene said the vehicle, also occupied by passenger Andrew Laclaustra, 19, also of Long Island, slid off the snow-covered roadway, skidded 180 degrees and hit the end of the flatbed trailer.

The two occupants were wearing seat belts at the time and they were not injured, and the car sustained only minor damage.

Leave a reply Click here to cancel the reply